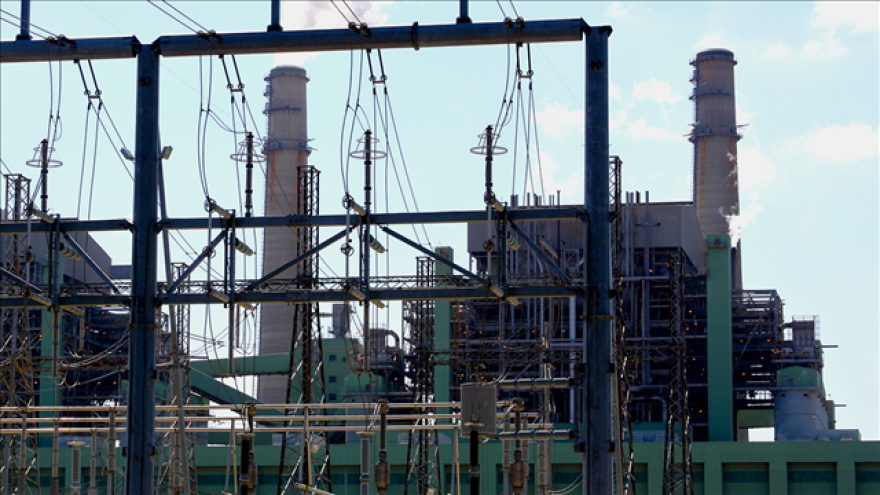 MANCHESTER, Ohio (CNN) -- Smokestacks rise up through a swipe of naked trees under a gray sky.

Nestled between two coal-fired power plants, Manchester is a mass of closed storefronts, a smattering of broken windows and a couple of restaurants and one bar along the Ohio River.

Residents in the southern Ohio town of 2,000 rely heavily on the plants -- directly and indirectly -- to provide jobs and keep the local economy afloat.

Now, like a number of other coal-fired power plants across the country, both could close sometime in 2018. In email to CNN, Dayton Power & Light Co., co-owner of the Stuart and Killen plants, says it's responding to "market-driven financial challenges." The coal industry is facing an uncertain future, with the threat of cheaper natural gas, stricter carbon restrictions and new environmental regulations.

News of the possible closures broke shortly after the election, leaving the already down-on-its-luck town worried about its future.

Manchester is in Adams County, which went for Donald Trump decisively in November. Supporters here remain hopeful that the new President can play a role in keeping their paychecks steady and their families secure.

Manchester Mayor Robert Hilderbrand says his father helped build one of the plants. "Have you ever in your life seen two power plants like this with a town in between?" he asks. The impact of not one but two closing would be tremendous, he says.

Working at one of the plants is the best job in the county, says Chuck Shelton, a longtime employee at the Killen power plant.

"You get to go outdoors, work by the river," he says. "What else could you want?"

He was surprised to hear about the expected closing of both plants next year. "I didn't think it would happen in our lifetime, and now people at my plant will be out of a job," he laments.

What's worse, Shelton adds, the next closest town with available work is an hour away.

However, Will Richards, an employee at the Stuart power plant, says he remains hopeful despite hundreds of jobs being at risk. "President Trump has a very positive attitude toward coal, and it felt a bit safer voting for him. It felt more secure for my future."

In the town's only bar, Bottoms Up, retired and out-of-work plant workers crowd the counters on an early midweek afternoon.

Between sipping $1 Miller Lights and playing pool, a conversation about the potential closing of the plants collides into one about the election.

Some said they voted for Trump, while others went for Hillary Clinton. Still, some didn't even bother to vote at all.

A retired veteran who later became a construction worker at one of the plants doesn't have many nice things to say about Trump.

"Don't talk to me about that man!" Marvin Floyd huffs, rolling his eyes and setting up a shot at the pool table. "He is going to be no good for this town, and none of these people get it."

Bar manager Deanna Dryden adds she didn't vote in the election because it was "like choosing between two evils so my vote wasn't worth it."

DP&L told CNN in a written statement the closures are proposals and not certain at this point.

Many coal-fired plants are expected to close in the coming years, according to the Environmental Protection Agency. "Coal plant communities are faced with potentially long-term job and tax revenue loss, legacy environmental contamination and the need for new economic opportunities," one EPA fact sheet says.

But much more is at stake than just work for those whose livelihoods and histories are ingrained in this tiny town.

"You have to live here to understand. You drink the water and it gets in your blood. I could live anywhere in the world, but my heart is here," says Jane Wilson, a local business owner and fifth generation Manchester native.

Both Richards and Shelton point to Trump's deal with Carrier to keep jobs at a plant in Indiana just after the election.

"If he could get someone to buy the plants, it would mean I get to keep my family farm," Richards says.

If he had 15 minutes of the President's time, Shelton says he would make a plea for the town. "I'd like to see Trump get with our governor, get with the EPA, get with the owners of the plant and see if it can be put up for sale and give the option to people to buy them," he says.

Closure of the plants, the mayor says, will affect his small town hard because it not only relies heavily on them for jobs but also for tax dollars. A large portion of the taxes the plants generate go toward schools in Manchester. Without the revenue and tax dollars, the school district will lose nearly two-thirds of its budget, the mayor estimates.

The possible closure weighs heavily on Shelton, who has five children to care for. "Education is the future," he says. "Without the schools, what can I give my kids?"

Manchester might as well shut down as well if the plants close, everyone who spoke with CNN agrees. Richards says the town would face a downward trajectory without action.

"If (Trump) can't deliver and we close, my life is going to dramatically change," he says. "You're going to see a lot of people it's going to be hard on. You'll see people stop making their car payments, their house payments, go broke, doing drugs; it's going to be a domino effect. It's sad."

Hilderbrand, the mayor, says he remains hopeful the town will make a comeback. "It could be something one day," he says. "It's the men in overalls who built this country, but men in suits destroyed the country."

He counts Trump as one of those men in overalls.

Shelton doesn't want to put too much pressure on the new President but give him some time.

"I don't think it's 100% up to Trump. He has to report to other people. It's poor business decisions," " he says, although whose he can't say.

Richards has one thing he'd like to say to the man he voted for: "Help. We need your help."