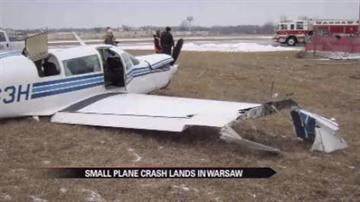 WARSAW, Ind. -- A single prop aircraft crash landed in Warsaw at the airport.

Crosswinds tipped the plane as it attempted to land. The plane was headed to Grand Rapids from Ohio and stopped in Warsaw to refuel when it slid in between an above ground gasoline tank and a fence.

There was significant damage to the aircraft, and the 63-year-old pilot and his son on board were not injured.