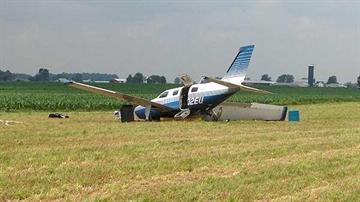 WAKARUSA, Ind. -- A single engine plane went down in a field near County Roads 9 and 44 in Wakarusa Friday around 1 p.m.

Nevin Martin was chopping hay in his field when he first spotted the low flying plane.

"I thought he was going to land real smooth, he was doing a good job of putting it down, but then at the bottom of the dip the ground swooped back up and I believe that's when his wheels kind of collapsed,” said Martin.

The plane skidded to its side, crushing the right wing.

"It looked like slow motion to me. It skidded off and stopped and then my first thought was if he got hurt,” said Martin.

Amazingly, the pilot, 64 year old John Seaver of Elkhart, was not injured.

"He didn't get hurt at all. He signed off from the ambulance crews so he's a very lucky man and I think he's very grateful that the outcome was to his benefit today,” said Captain James Bradberry of the Elkhart County Sheriff’s Department.

Seaver and Martin worked quickly to contain the leak.

"I had a rag in my pocket so I tore it into little strips and quick plugged it up on the one wing,” said Martin.

Seaver was headed from Elkhart to Indianapolis when the plane went down.

The sheriff's department says this is the best possible outcome for a worst case scenario.

The FAA will investigate.