Smoke-free group won't give up on smoking ban in St. Joseph Co. 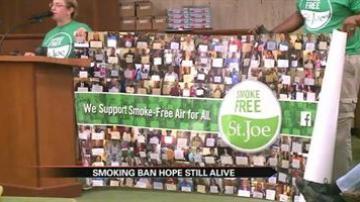 SOUTH BEND, Ind. -- Even though the South Bend Common Council voted against a smoking ban in some restaurants and bars Monday night, Smoke Free St. Joe members say they will resubmit a request for the smoking ban as soon as they can regroup.

Karl Nichols, the spokesman for Smoke Free St. Joe, has a video showing what lung cancer looks like.

"There's a tumor starting to form on the lung, and on this one there is no tumor," said Nichols.

The video of an unhealthy human lung demonstrates why Smoke Free St Joe is fighting for a smoking ban in local bars and clubs.

"When we pump these lungs up at the same rate, the healthy lung inflates at such a larger rate that the unhealthy lung," said Nichols.

Even though the common council rejected the smoking ban 5-4 Monday night, Nichols says this is only the beginning of their fight.

"It's not if we're going to come back, it's when. And it's not about being beat down and detracted from our goal. When you're passionate about something you just don't give up," said Nichols.

Since South Bend rejected the smoking ban, will they try again with the county?

"We haven't decided at this point, we're just not sure. But we are going to come back and we will approach somebody. We just don't know who it will be yet," said Nichols.

Nichols says South Bend is the largest city in the state without a smoke free ordinance.