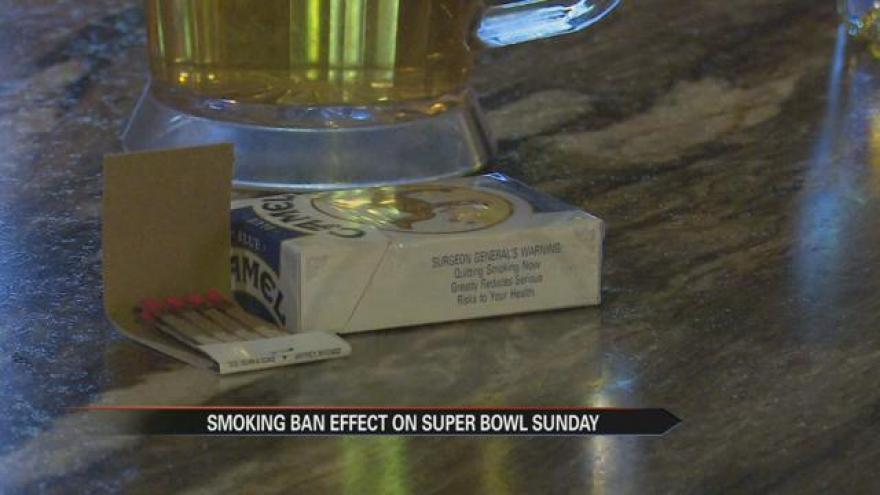 With the first Super Bowl since South Bend implemented a smoking ban, South Bend and Mishawaka bars say it could change the game.

“It will be an interesting test,” said Gary Weese, the manager of South Bend bar Jeannie’s Tavern.

He’s waiting to see whether South Bend’s smoking ban affects who shows up for family dinner.

“All my friends are going to be here. The gang’s here today,” said one of their bartenders and long-time patron, Jimmy Glenn.

This is the first year, in the 40 the tavern has been around, that they’re dealing with a smoking ban.

“I think it’s going to make it difficult. I think South Bend bars are having trouble, and I think on a night like tonight especially, when it’s sort of a party night and people like to go out and drink and smoke and watch the football game, I think it will be interesting to see what happens, but I think it will definitely affect us,” said Weese.

He says most of their customers smoke, which is why they still haven’t taken down the sign on their door saying, “This is a smoking establishment.”

“It’s an adjustment for a lot of people,” said Weese.

“We’ve been very lucky. Our crowd is very loyal. If they have to go sit in their cars to smoke a cigarette and then come back in to be with us, they will,” said Glenn.

That’s not the case with other South Bend bars, according to ‘The Bar’ in Mishawaka.

“I think the smoking ban is having an effect on us. We are seeing a lot more patrons in our bar than we usually do this time of year,” said Ann Ross, a bartender at Bleachers (a.k.a. The Bar).

At the end of the day, she says it all boils down to one choice.

“They can either choose to go to a non-smoking bar or they can come here and still smoke,” said Ross.

Both businesses say it’s still too early to tell how the smoking ban will impact them long-term.

ABC 57 will continue to track the ban’s effect.