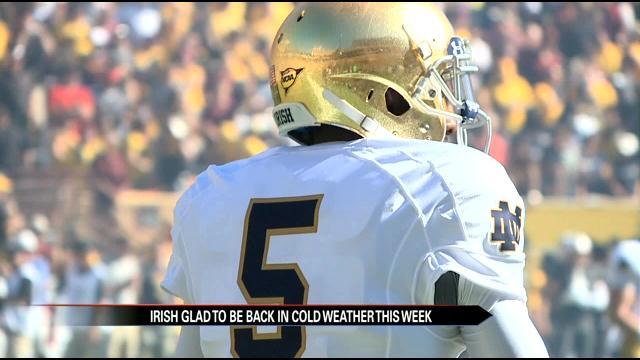 The Fighting Irish are back in action in less than 48 hours, and the team braved Thursday night's cold and snow on the practice field to prepare for the Northwestern Wildcats.

“It was coming down there pretty good and we got the plow out there and plowed and it was in pretty good shape so the field conditions should be really good tomorrow,” Head Coach Brian Kelly said Thursday after practice.

“We have to handle it in terms of execution, and attention to detail and all those things. We've practiced in the elements, we were out there today, we had seven on seven,” Kelly said.

Elements that Kelly says shouldn't affect his team's ability to hang onto the ball Saturday.

“It doesn't matter what the weather is, it was 85 degrees and sunny and we turned it over five times,” Kelly said.

And with quarterback Everett Golson's progression at practice this week, Kelly says we will see a quarterback take the field this Saturday that we've yet to see this season.

“What I'm most pleased with is, we got great leadership from Everett this week...[he] took control this week at practice and was vocal and was a guy that I hadn't seen before and it was enjoyable to be out there coaching him. Great week of practice expect great things from him Saturday," Kelly said.
Game day temperatures are forecast to be below freezing all day. Kick off is set for 3:30 Saturday afternoon.