Snow plow drivers benefitting from all the snow 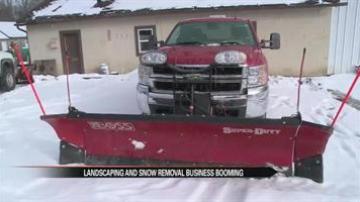 SOUTH BEND, Ind. -- All of the snow and cold weather has many people excited for spring, while others are thankful for the work.

Contractors at Foegely Landscaping say they measure how successful plow season is by the number of times they are called out to clear parking lots and sidewalks, not by the amount of snow we get.

With the frequent number of lake effect snow systems moving through Michiana this winter-they say it couldn't be better for business.

"It's kind of taxing on the guys, the equipment, your personal life, but it's been a really good thing," said Brian Hominiuk, Vice President of Foegely Landscaping.

With heavy amounts of snowfall coming early and often-local snow removal companies have been busy since last fall.

"We started pushing snow November 12 to be exact and here we are in the third week of January and we've been out 45 times," said Hominiuk.

Whether we continue to get a light dusting here or a heavy dumping there, those in the snow removal business just hopes it keeps coming.