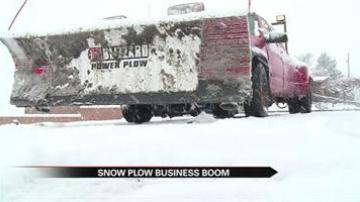 SOUTH BEND, Ind. -- With all the snow, business is booming for private snow plow companies. Mark Smith has been plowing roads in Michiana for 30 years and let us ride along while he plowed.

Smith says heavy, wet snow is the most dangerous to walk or drive on - and takes the longest time to plow.

Smith says he has been out since 1:30 a.m. Wednesday and will stay out until it's all done.

"There's been times where we've been out for three or four days," said Smith.

He's not complaining. In fact, he's grateful we're having a white thanksgiving.

Smith says, when it comes to plowing, the key is to always stay ahead of the storm.

"You're supposed to but it never happens, you can't quite get that far because it's Mother Nature, it just keeps coming," said Smith.

If there's snow on the ground, plows will be out through Thanksgiving, but Smith says that may not be the case everywhere.

Experts say if you are planning to take a trip this Thanksgiving, make sure you throw a couple of bags of salt in your trunk. The weight of the bag will help keep your vehicle from sliding.

Smith says parking lot exits and near stop signs are the most important places to plow.

"That way people don't slide out in to an intersection," said Smith.

Smith says if you put bags of salt in your trunk, place them as close to over you back tires as you can because it will give you a little more traction.