Snow plows having a hard time keeping up with snow 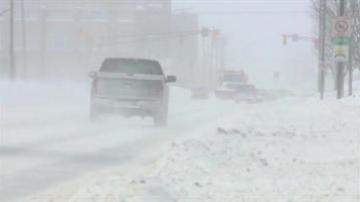 MISHAWAKA, Ind. -- Snow plow drivers are having a difficult time keeping up with all of the blowing and drifting snow. Most snow plow drivers just want drivers off the roads and out of their way.

This winter has been marked by record breaking low temperatures and dangerous blowing snow.

Monday the white outs were bad enough to pull plow drivers off the road for a few hours because of zero visibility.

Ryan says his 18 employees can't catch a break, but they've managed to keep all of Mishawaka's roads open.

"Our main roads are in decent shape. They're going to be slick but they're passable. We're working on our secondary and residential right now and then our dead-ends and cul-de-sacs. Those take a little longer," said Ryan.

In South Bend - it's a different situation.

"As long as the wind's blowing, the roads are going to continue to drift," said John Pemberton Jr., Operations Manager of the South Bend Street Department.

The South Bend Street Department is responding to a city-wide snow emergency.

No one will be allowed on the roads Monday night so the plows can work.

"We have a list of areas where the drifts are worse than others so we concentrate on making sure that we don't lose those lanes because once they get too bad, and then we go to get heavy equipment out there," said Pemberton.

The travel ban for St. Joseph County and the city of South Bend began at noon Monday and will end Tuesday at 6 p.m. Any drivers out after 7 p.m. Monday could be ticketed.