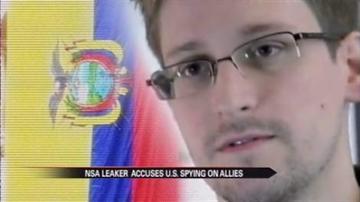 Former NSA contractor Edward Snowden is still hiding in an airport in Moscow and leaking more documents that allegedly show the US spied on key allies.

According to a German magazine, Snowden leaked documents that allege the US has spied on diplomats in 38 embassies around the world.

President Obama is pushing back against opposition from European leaders saying he does not know exactly what is in those allegations.

"Take a look at this article, figure out what they may or may not be talking about, and we'll communicate to allies appropriately," said President Obama.

Some believe that Snowden may be in limbo. He has no passport and his options are dwindling.

Right now, he is seeking asylum in at least 15 countries, but so far, none have granted his request.