Snowfall: Thursday night is the best chance for accumulation. 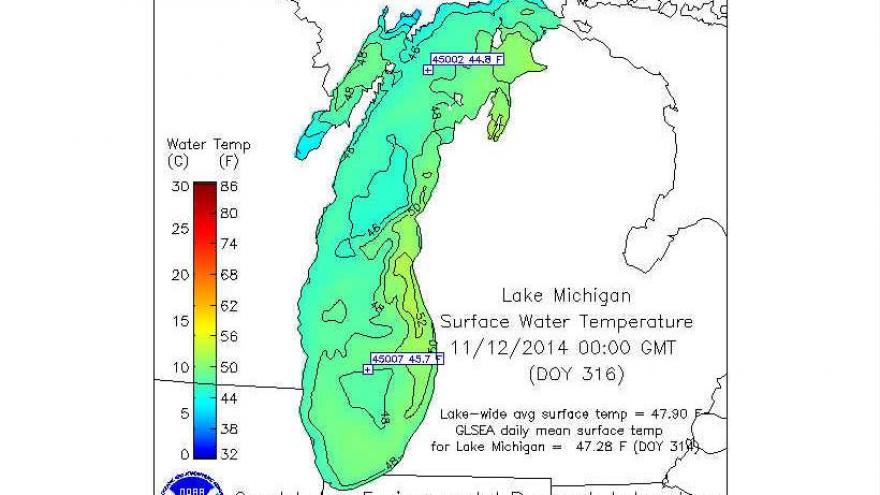 ABC-57 NEWS -- Even with a blast of arctic air expected to move into Michiana the set-up for lake effect snow is marginal. For one thing lake temperatures are significantly cool for this time of year, in the 40s (Fig 1). The larger the temperature difference between air and water the great the potential for lake effect, and heavier snow.

Tuesday night with air near the surface and the ground still above freezing a rain snow mix with no accumulation is forecast.

The wind is a key factor in driving lake effect snow (Fig 2). The wind turns westerly Wednesday, this set-up is not a driver for heavy lake effect snow for Michiana. But with a dip into the lower 20s Wednesday night flurries are possible. The most favorable set-up is when the week veers back to the northwest Thursday night into Friday.

At this time significant snowfall is not expected, looking at model estimates, even a favorable snow ratio ( which we do not have) keeps totals well under one inch (Fig 3). A coating to a half inch is possible especially north of the state line (where an isolated inch isn't out of the question), accumulation south of US-6 is not likely.

Breaking down the likelihood for snowfall through the end of the week, Thursday night into Friday has the greatest chance for any accumulation (Fig 4). At the worst it could mean brushing off your car and some slick spots on roads.