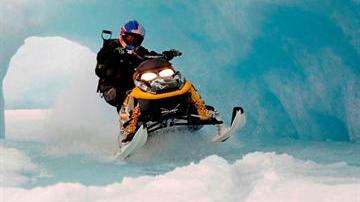 BENTON HARBOR, Mich. - Lake Effect Powersports in Benton Harbor wishes it was living up to its name this winter.

"It hasn't been good, for sure, we sold about half the sleds we normally sell," Tyler O'Connor said Friday evening.

New snowmobiles have been sitting in the show room for weeks. Sales on used sleds haven't been good either.

"Typically we would sell trade ins, I've only gotten five this year, while typically we see 20 maybe."

Workers at Lake Effect Powersports said they think the season is pretty much over for snowmobile sales. O'Connor said that many customers are already looking for new boats for the summer.

"We have been selling boats pretty well. Maybe because the snow season never started so people kept shopping in the fall through the winter.

It's not just the showroom that is getting hit hard, things are also pretty bleak back in the service department.

Only a few sleds have been brought in this season and most have been for routine maintenance.

"It's been very limited."

But you won't hear West complaining about the lack of snow, "I like the sunny warm, 70's, lower 80's, good motorcycle weather," West joked.

You can check out Lake Effect Powersports by clicking here.