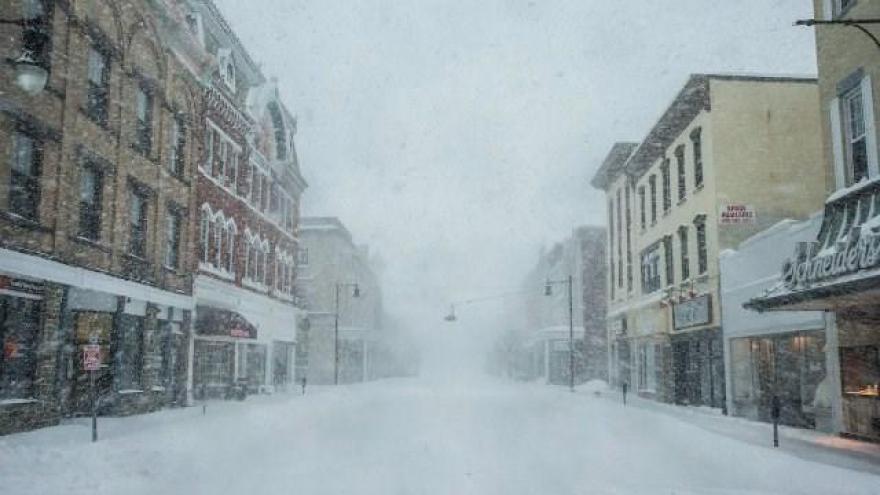 (CNN) -- Normalcy was trickling back to some areas of the Northeast after a major winter storm dumped more than 30 inches of snow in places.

Airline travel also is getting back to normal. More than 1,200 US flights were canceled Wednesday, but the outlook was looking much better for Thursday, according to Flightaware.com

The storm led to six deaths in the United States and one in Canada this week, authorities said -- a toll that started Monday as snow fell in Wisconsin.

A roundup of the deaths:

• Two men died of cardiac-related problems after trying to clear snow Monday in Wisconsin's Milwaukee County, the county's medical examiner's office reported. One man, 76, was operating a snow blower before he died; the second man, 64, was shoveling snow, the office said.

• In Longmeadow, Massachusetts, a snowplow driver was killed in a collision Tuesday with an Amtrak snow-plowing train, fire Chief Andrew Fraser said. The plow driver was crossing the tracks, which the train was working to clear after roughly 12 to 15 inches of snow fell.

• In Canada, a driver of a tractor-trailer died from injuries after a multicar pileup Tuesday during blizzard conditions on Highway 401 in the township of Leeds and the Thousand Islands in southern Ontario, a township spokeswoman said.

• In East Hartford, Connecticut, an elderly man died after being struck by a snowplow Tuesday afternoon, police said.

• In Gilford, New Hampshire, a 16-year-old girl was killed in a weather-related accident, police Chief Anthony Bean Burpee told CNN. The victim was the daughter of a Gilford police dispatcher, according to authorities.

More than 30 inches of snow were reported Tuesday in parts of Pennsylvania and upstate New York, according to the National Weather Service.

The largest amount reported was 41 inches in Bridgewater, New York, a hamlet about 45 miles southeast of Syracuse. Binghamton, New York, set a 24-hour snowfall record with 31.3 inches, breaking the previous record of 23 inches set in February 1961.

"Areas along the coast from New York to Boston didn't see as much as expected," said Taylor Ward, a CNN meteorologist. "But some portions of the Northeast have seen more than 30 inches of snow."

Amtrak announced that regular operations resume Thursday for the Acela Expess, Northeast Regional and other services that operate between Boston and Washington, DC. Empire Service will still be on a modified schedule, according to the company.

Metro-North trains, which ferry commuters to and from New York City, will run its regular weekday schedule Thursday. Customers should still expect some delays, the company said in a statement.

Though the storm's most powerful portion moved out to sea, it still was expected to affect eastern Quebec. A blizzard was expected to drop more than 10 inches of snow and whip the area with wind gusts of more than 60 mph, Environment Canada said.