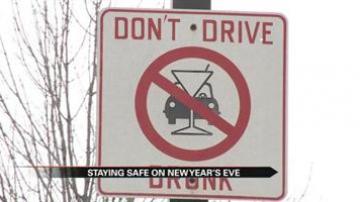 MISHAWAKA, Ind. -- On one of the biggest party nights of the year, police are worried about people having a few drinks, then driving on snowy, slick roads. It could be a recipe for disaster.

"No alcohol is the right amount of alcohol to drive a car," said Dr. Dale Patterson, Director of Family Medicine Residency at Memorial Hospital.

"What it does is it delays the communication from your brain to the rest of your body," said Lieutenant Tim Williams of the Mishawaka Police Department. "It delays our reaction time. The slower our reaction time is the greater chance we're going to have hitting something,"

Williams says if you're going to drink, designate a driver, especially with snow expected.

"It's so important that when you're on those slick roads, that you have good reaction time and that you don't panic when you try to stop and start sliding," said Williams.

There's a myth that if you eat while you drink alcohol, you don't get as drunk. But doctors say it's just that, a myth.

"You may not get as drunk as fast because the eating will slow the absorption, but over time that alcohol will be absorbed. So it just kind of delays the effect of the alcohol," said Patterson.

Doctors say New Year's Eve is one of the most common nights for people to end up in the ER because of binge drinking.