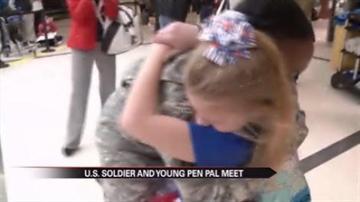 During war, children across the US send letters to soldiers all the time. One soldier actually met her pen pal.

Chief Warrant Officer Veronica Davis received a letter a few years ago from a then 7-year-old named Sophie. To Sophie's surprise, her soldier pen pal wrote back. The two sparked a friendship over the course of her tour in Afghanistan, and this week, the two friends from different worlds met face to face.

Sophie was even recognized for her letter writing efforts for helping supporting troops.