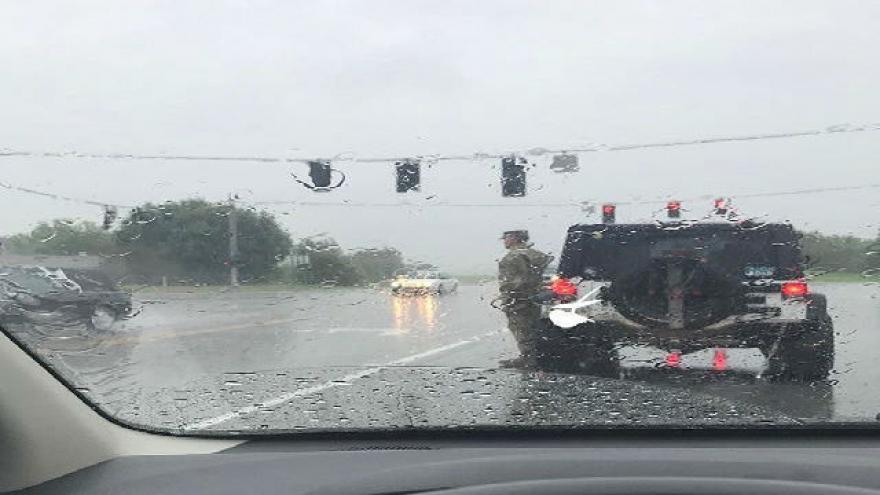 A soldier was recently captured standing at attention in the rain outside his vehicle during a funeral procession in Vine Grove, Kentucky. Photo courtesy Erin Hester / Instagram

(CNN) -- A soldier is being praised on social media for going "above and beyond" during a rainy funeral procession in Kentucky.

The soldier was captured in a photo last Thursday in Vine Grove. He was standing at attention outside his car in the pouring rain as the procession went through an intersection.

The photo was taken by Vine Grove resident Erin Hester, who wrote she was "completely touched" by the moment.

"We had come to a red light when the intersection was blocked by our local police department," Hester told CNN. "The procession lasted at least a minute and he stood the entire time at attention."

Hester decided to make the post public on her Facebook profile, something she told CNN she never does. Since then, Hester's post has been shared more than 120,000 times.

Stopping a car during a procession or abstaining from passing is not only considered a sign of respect -- it's also the law in Kentucky.

Thousands have commented on Hester's post, thanking her for sharing the solemn moment and hailing the soldier a "class act" and "true hero."

Hester still doesn't know who the soldier is, but said she feels "he will not want recognition as this is probably something that is a part of his core values and does this on a regular basis."