Some farmers are felons under new Michigan law 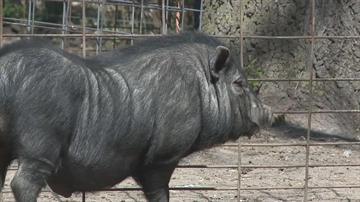 BUCHANAN, Mich. - If you own a certain type of pig in Michigan, you can now go to jail. The Michigan Department of Natural Resources began enforcing ‘feral swine’ April 1st.

The law Passed in October 2011 placing wild pigs on Michigan’s invasive species list. Owning one of the feral pigs is now punishable by a two-year felony.

"There you have a pot belly pig,” said Jean Wolf, pointing out a swine in question at her pig farm outside Buchanan. “That is not a feral pig."

Wolf raises about 70 pigs as pets on her property and was reluctant Friday to show ABC 57 News around. "When you first wanted to do the interview I didn't want my face shown,” she said. “That should tell you something."

Wolf is committing a crime under the new law by knowingly raising an invasive species.

According to an MDNR spokesperson, the law is not intended to target farmers but rather protect farmers from the diseases feral pigs carry.

Wolf and other farmers feel that the definition of ‘feral’ is too broad and encompasses domesticated animals. All of Wolf’s pigs are considered illegal under the standards.

By the DNR’s classification of feral swine, any pig with a certain hair color, a straight tail or pointy ears would be considered feral among other characteristics. Only one trait from the list is needed to fall into the feral category.

"If you had them live outside they would grow fur to help protect against the sun,” said Ellie Mullins. “So automatically the DNR would classify that as feral and illegal."

Ellie Mullins and her husband Pat own Local New Buffalo, a small grocery store in New Buffalo. Open for a year, they’ve grown a customer base selling homemade bacon and sausage.

The Mullins use naturally raised ‘heritage pigs’ for their pork and feel if they want it to be local, and legal it needs to come from Indiana.

Heritage pigs are raised outside and grow fur making them illegal under the law. "Saying it's not allowed in Michigan, that really hurts our business," she said.

The DNR has asked for farmers to send in pictures of their hogs so they can decide if they are feral or not. If they are determined to be feral, they must be either killed or sold to another state where feral swine is legal.

"They're saying annihilate them and that's wrong," said Wolf. She isn’t willing to send a picture and give the DNR her name. Wolf said she does not want to lose her pets. "Something has to be fixed before they start shooting pigs at random."

According to a group called the ‘Farm-to-Consumer Legal Defense’, four lawsuits have been filed against the MDNR over classification of domestic pigs.