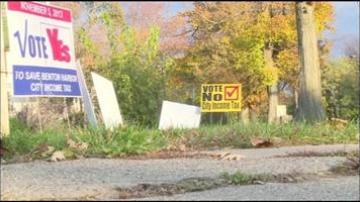 BENTON HARBOR, Mich. -- People who live in Benton Harbor will head to the polls to vote on an income tax that many say could either save the city or cause it to spiral into an even bigger financial problem.

ABC 57 has talked with people who are adamant about voting yes and passing the tax.

Sunday, ABC 57 talked with people who are on the other side of the fence; very much against the tax.

Some say if the tax passes, it could drive businesses out, which would be detrimental for the city.

Mayor James Hightower says he understands the need to bring revenue into the city, but an income tax is not the way to do so. He says the answer to long-term success lies in attracting businesses to the area.

Bryan Tutton, the president of the Benton Harbor Downtown Authority says the only way to fill the empty storefronts in the city is to stop increasing taxes.

Tutton even knows business owners who got wind of the tax and lost interest in moving to the city.

Tutton says the key lies in being innovative and creative.

"The city of Benton Harbor is starting to move. It's starting to improve. We should be looking at how we can do more with less as opposed to just asking for more in taxes from residents and corporations."