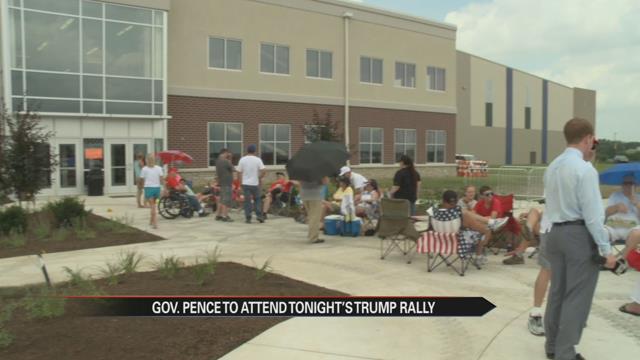 A Trump rally is set for the Grand Park Events Center in Westfield where supporters are anxious to find out if there will be a VP announcement.

The republican national convention kicks off Monday, July 18th so time is ticking for Trump to name his nominee. And if he wants pence to join his ticket, the governor will have to remove himself from the Indiana ballot for governor by Friday.

"Today's a big day. It's gonna go down in the history books,” said Courtney Modisette who was first in line at the rally.

Which is why Courtney Modisette arrived at 6:50 Tuesday morning to be first in line for Donald Trump's Westfield, Indiana rally.

This is her fifth trump campaign stop and she's hoping to witness the billionaire announce Governor Mike Pence as his running mate.

"Mike Pence is the best candidate, in my opinion, that he's got right now, that he has. He's very conservative and I think he'll keep Trump grounded,” said Modisette.

Those thoughts echoed by other trump supporters waiting outside the Grand Park Events Center for hours in the sweltering heat.

"I think that Mike Pence, also, is gonna do a great job as vice president. I think he's gonna do a good job of keeping Trump grounded,” said Trump supporter John Applegate.

But not all Hoosier Trump supporters are dead set on a Trump/Pence ticket. Some say they'd prefer former House Speaker Newt Gingrich while others say they want a military general in the VP slot.

Passionate supporters were spreading throughout the venue Tuesday evening for things to kick off at 7:30 p.m. looking to see if Donald Trump names his nominee for vice president here in the Hoosier state.