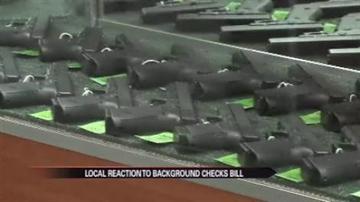 KNOX, Ind. -- A bi-partisan deal has the senate one step closer to passing a new piece of gun-control legislation. The proposal would expand background checks for all commercial gun sales, including gun shows and internet sales.

It would require background checks for anyone trying to buy a gun. The only exception would be for gun exchanges between close friends and family members.

Ron Joseph is an avid hunter.

"I’ve always, since I was a kid, loved to hunt," says Joseph. "Love to deer hunt, turkey hunt. I have raised my son to be the same way. So, it’s just something I love to be outdoors and do."

He owns several guns. While he wants to see his 2nd Amendment right to bear arms protected, he says he supports a new proposal in the senate that would require background checks at gun shows and for online sales.

"I think it is a good thing, but how far will it go? I think they need to go in other directions also," says Joseph.

Supporters of the bill say this will help keep criminals and the mentally-ill from getting their hands on guns, but Joseph says requiring more background checks is not foolproof.

"It’s like drugs. If people want to get drugs they find it one way or another," says Joseph. "The same with guns, people that are criminals are not going to do a background check."

The bill will not have a ban on semi-automatic firearms.

It will also make it easier for people with concealed-carry permits to take their gun across state lines, where it would normally be breaking the law.

Still, this new proposal is far from satisfying both side of the issues.

So for now, it is whether both parties can compromise and get it approved.