Some residents in Benton Harbor, Covert still without power 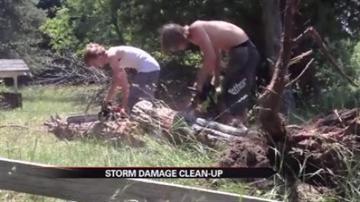 BERRIEN COUNTY, Ind. -- Two days after the storm and many Berrien County residents remain without power. Crews have been hard at work, but several in Benton Harbor and Covert are still waiting for their power to be restored.

Residents say the clean up process will take some time.

The most severe damage in the Covert area includes massive trees that were knocked down onto houses and power lines.

One resident says she has no option but to wait it out until her power is turned back on.

"Hotels are full. I've called up there to South Haven and checked out getting a hotel for the next couple of days and, we called two, and there wasn't anything available. And as far as St. Joe and Watervliet had nothing even. So I think we're just going to have to tough it out here,” said Diana Parrigin of Covert.

Midwest Energy Cooperative says they expect to restore power to all their customers affected by the storm by Friday night.