Some residents petition to recall the mayor of Benton Harbor 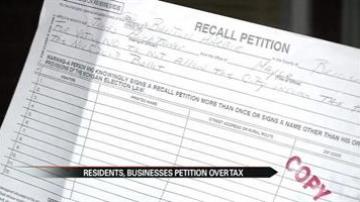 BENTON HARBOR, Mich. -- A proposed city income tax has a town divided. Some of the residents want the new tax, but the mayor does not. Some people are trying to have the mayor removed from office because of it.

The petition was filed with Berrien County on Wednesday, October 23.  If the language on it is approved, one Benton Township resident, Edward Pinkney, will start going door to door to hoping to get enough signatures to remove Benton Harbor’s mayor from office.

Mayor James Hightower is against having the tax, and voted against putting it on the November 5 ballot.

Pinkney is one of many who say this tax is important for the city.

"We are making sure he knows how important this is and we are willing to go to the ultimate for this," he said.

ABC 57 asked Pinkney if petitioning against the mayor would actually help pass the tax.

"Well, it's designed to get people to see how important it is to vote yes, more than anything else."

But not everyone is on board with trying to oust the mayor.

Former mayor of Benton Harbor, Wilce L. Cooke says he supports the tax but petitioning against Mayor Hightower right now is nothing but a distraction.

"We have to focus, we can’t fight too many battles at one time. My focus is on the city income tax so that we can be able to save our city." said Cooke.

The election is November 5.  Not everyone in the city is in favor of the tax, in fact many residents and business owners agree with the mayor's stance and are against it.