Some sidewalks in Goshen are under a foot of snow 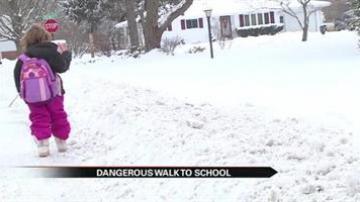 GOSHEN, Ind. -- Earlier this year, Goshen Schools cut their busing program because of financial cuts that were made to the budget. In place of bus routes, the city laid sidewalks for kids that have to walk to and from school. But right now, those sidewalks are buried under a foot of snow, and kids are walking in the street.

"I think they would feel terrible of a child got hurt or got hit by a car because they walked in the street because the sidewalks were not clear of snow," said Michelle Barkey, a concerned Goshen parent.

"They put this sidewalk in for the kids to be able to get to school and from school safely, because they had to cut back on the busing, but now they’re not clearing the sidewalks for the kids," said Barkey.

Kids try to tackle the mounds of snow, but some of them end up walking in the streets.

The Parks Department says they only clear sidewalks that are within trails and bike paths the newly laid sidewalk on West Clinton is not one of them.

The Streets Department has been working 10 to 16 hour shifts to clear main roads; they are not responsible for clearing sidewalks.

The city says it's up to homeowners to pick up their shovels.

Concerned parents want the city to do something, whether its pull out the city snow plows or enforce an ordinance that will require homeowners to do it.

Mayor Allan Kauffman says in order for an ordinance to be put into place that would require homeowners to clear the sidewalks, Goshen city council would have to draft an ordinance, and then vote to establish it.

For now, Mayor Kauffman is asking homeowners to step up and help clear the sidewalks.