Something out of 'Alien': Rare frilled shark caught off Australian coast 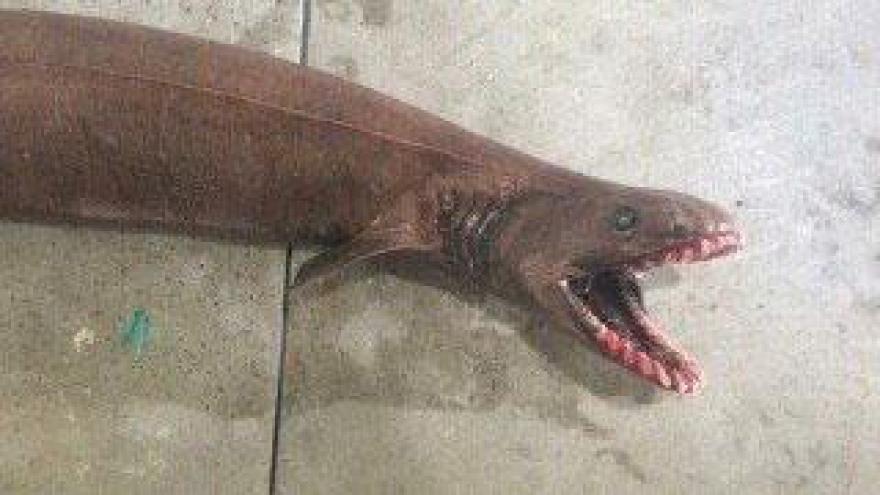 
(CNN) -- It looks like something out of "Alien," but has more in common with "Jurassic Park."

It's a rare frilled shark that has been caught by a fisherman in Australia, where no one remembers ever seeing one caught before.

With a mouth packed full of needle-like teeth and a body like an eel, the six-foot long frilled shark is sometimes described as a fish "fossil" that dates back 80 million years.

David Guillot says that it's like nothing he or his fellow fisherman have ever seen in the deep waters in Australia's south west.

He caught the fish while trawling for fish at 1,100 meters a week ago, and thought he might have discovered some new type of shark.

"I've been fishing 30 years and never saw anything like it. So I brought it in," he said by phone from his boat Thursday. "Honestly we thought we had caught a brand new species, maybe discovered something wild."

The shark is known to live at extreme depths in both the Atlantic and Pacific oceans, but are very infrequently caught because their habitat is mostly off limits to fishing, said Simon Boaz of Australia's South East Trawl Fishing Industry Association.

Guillot said that the frilled shark was still alive when he got it to the surface. But it did not live after being pulled up from the frigid depths. So he offered it to a local museum.