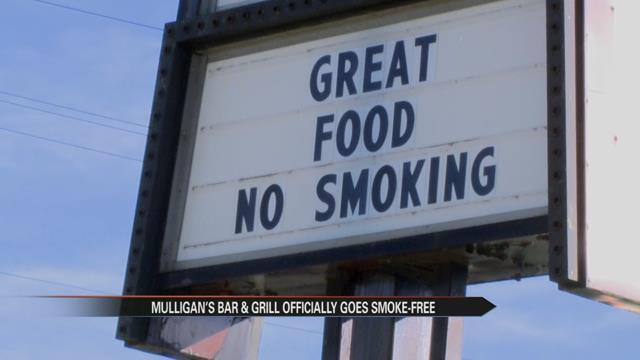 A milestone and makeover for a well-known establishment near the Notre Dame campus.

On Monday, Mulligan’s Bar and Grill took a major step ahead of the smoking ban that goes into effect on January 1.

“I am a cigar smoker and I smoke a lot of cigars. I did come to Mulligan’s in part for that purpose to smoke a cigar,” said Keller.

Keller said he was ok with the early transition as Mulligan’s became a smoke free establishment.

“It didn’t bother me. To give up a cigar is ok because they still provide that family atmosphere of being able to have some drinks, be with friends and forget about your worries,” said Keller.

And it was a complete Mulligan’s makeover in hopes of bringing in families, students and football fans that enjoy a smoke free atmosphere.

Gavin Ferlic, with the South Bend Common Council, was a leader in bringing the ordinance to fruition.

“I think it’s an outstanding thing for public health, number one. I think this is going to be great for their employees, their patrons, and we really hope from an economic perspective. We hope they can attract a lot of new customers. We think this is positive and congratulate Mulligans for making it ahead of schedule.”

So what about other establishments in the same boat?

“Some of them are a little angry. Sue you tried so hard and you went to all the meetings. I understand their point. They are scared. I cannot afford to be afraid,” said Mulligan.

Ferlic said the decision is solely up to the business,, but hopes other bars and restaurants facing the deadline, will follow Mulligan’s lead.

“We are hoping that a few more decide to make the transition ahead of schedule but if not that’s ok too. We are excited for the entire community and we think it’s great for community health,” said Ferlic.