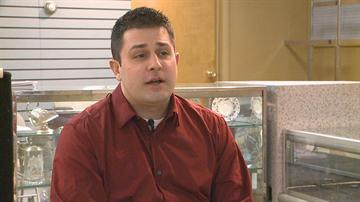 SOUTH BEND, Ind. – A South Bend businessman is caught in a legal battle after being arrested for carrying a gun in New York City, his case is making national headlines and stirring a nationwide debate on gun laws.

Ryan Jerome, who has lived in South Bend for 12-years (not counting service in the Marine Corps) and was raised in Sandusky, Michigan, is the owner of RJ’s Gold on Michigan Street in downtown South Bend.  He opened his shop on September 16, within two-weeks his business was doing so well that he was ready to take $15,000 worth of gold to a refinery.

“That refinery actually happened to be in Long Island, New York so that’s kind of how the whole thing started there,” Jerome described.

According to Jerome’s lawyer, Mark Bederow, before making the trip to New York and carrying thousands of dollars worth of gold on the streets, Jerome had an eye to his safety and checked to see if it would be legal for him to carry his .45-caliber pistol with him in the city.  Bederow claims the Jerome consulted a website about gun laws and a mistake led him to believe that his permit to carry a gun in Indiana would be valid in New York City.

“I most definitely wouldn’t have gone if I’d have known that it was illegal to take my weapon,” Jerome stated.  “I would’ve never taken it with me.”

Jerome’s trip to the “Big Apple” went without incident until he stopped at the Empire State Building and attempted to check-in his gun with security guards.  According to Jerome and his lawyer, the guards called the New York Police Department, who arrested Jerome.  They claim that’s the first time Jerome learned that his Indiana permit didn’t allow him to carry a gun in New York City.  Jerome said being arrested was surprising enough, but said he was shocked when an officer told him he was being charged with a felony for carrying the gun.

“At first I was just in disbelief, shock, utter shock, I could not believe it,” Jerome described.  “My entire life I’ve tried to do the right thing, I’ve lived by the law.”

What was even more shocking, Jerome said, was when he found out that the minimum sentence he would face would be 3-1/2 years in prison and the maximum was 15-years.

“I just couldn’t believe it, how could they sentence me to 3-1/2 years,” Jerome said

According to his lawyer, Jerome was held for 48-hours.  He hired an attorney from New York, Mark Bederow, who has been handling the case.  What has been surprising, Jerome said, is that his case has taken on a life of its own in the media.  Bederow’s story has been mentioned on national cable networks and talk-radio as well as many newspapers in New York and nationwide.  On Friday, he was scheduled for an interview on CNN.

“I can’t say that I’m excited to have this type of coverage,” Jerome said.  “It’s just, I think it will help, people see that this is a problem.

According to Jerome and his lawyer, he’s received enormous support from across the country.  What Jerome, a former Marine, said has been very encouraging is a campaign by Marine Veterans to oppose his prosecution.

“I have their back as much as they have my back,” Jerome said.  “Especially coming from a long-line of Marines in my family.”

Cable news, newspapers, news websites, online blogs, all have taken Jerome’s case and other cases regarding tourists being arrested in New York for carrying guns as a referendum on gun laws in the city.  But, Jerome’s lawyer said, national issues aren’t at the heart of their case.

“Our concern is Ryan, his liberty; freedom and future are at stake.” Jerome’s lawyer, Mark Bederow, explained.  “But, I think it’s fair to question the draconian New York statute in general.”

For now, Jerome is waiting to see what the District Attorney and the Grand Jury in New York will decide about his case.

“He has not been indicted and we certainly hope that he will not be and we continue to hope that the District Attorney will recognize that this case is better handled in a non-criminal fashion” explained Mark Bederow, Jerome’s attorney.  “We don’t believe that a criminal prosecution that will result in him getting a record and/or spending time in a New York State Prison is an appropriate outcome.”

Jerome said the waiting has not been easy.

“It definitely makes me wonder what could happen and where I could be,” Jerome explained.  “It’s very disturbing really and not just jail…it would literally ruin my life, it would stop me dead in my tracks.”

ABC57 attempted to contact the New York District Attorney’s Office, the New York Police Department and security at the Empire State Building but received no response.

Jerome’s case is scheduled to go before a Grand Jury in New York in February.