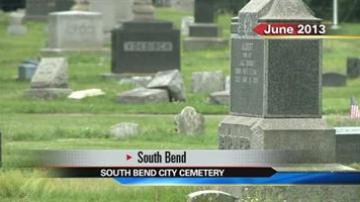 SOUTH BEND, Ind. -- It’s a major milestone for a century old cemetery in South Bend. The city cemetery is now officially on the historic register of deeds.

South Bend City Council President Oliver Davis has been working for almost a year to get the city cemetery some respect, historical recognition and most importantly funding to keep it in a state that honors the final resting place of the dignitaries who helped form the city of South Bend.

Weather and time took a toll on the cemetery- there are broken gravestones, vandalized graves, and at least 100 headstones knocked over.

But underneath some of the overgrown headstones are people who helped mold our city and country.

People like Schuyler Colfax- the Speaker of the House under Lincoln and Vice President under Grant. It also has the grave of the first St. Joseph County soldier killed in the Civil War.

So what does this resolution mean? It helps with funding that can now come from grants and even the Daughters of the American Revolution.

The council hopes to have a five-year plan to get the cemetery back into a respectable state and raise the money to keep it that way for generations to come.

The resolution also hopes to bring a stronger police presence to the city cemetery in hopes of keeping those vandals away- and make it a destination for visitors and residents in South Bend.