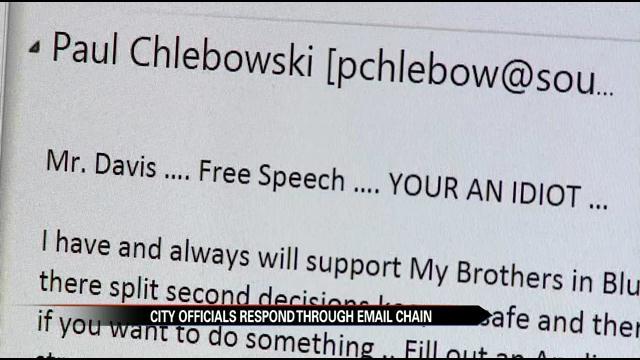 “Reply All” - It is a common mistake that makes people cringe in the office.  Abc 57 News is looking closer into an email chain involving South Bend city government employees and the media.

Tuesday, Councilman Henry Davis Jr, along with two other council members, emailed a press release to city workers and local media.  That release called for support to stand against the, “breathe easy, don't break the law” shirts that are being made and sold by a Mishawaka Police officer.  And that email was not well received.

Emails started rolling in around 7:30 Tuesday night.  “Trash” and “junk”, just two of the words used by city employees in response to this press release emailed out by Councilman Henry Davis Jr.

In the release, Councilman Henry Davis Junior along with Oliver Davis and Valerie Schey, call the “breathe easy, don't break the law” shirts that are being sold, divisive and damaging.

Nearly 30 people replied to the email – and they did not do it privately.

South Bend firefighter Paul Chlebowski wrote, “Mr. Davis …Free speech …. You're an idiot …If you want to do something…Fill out an application...Strap a gun to your hip… And walk a beat in an area where you're hated because of the ignorant racial comments, spread by the uninformed…Remove my name from your e-mail list.”

ABC 57 News showed this and about 30 other public emails to people outside the county city building.

“For them to respond in the manner that I read, you would think they would want to come closer to work with the community to get a better understanding,” said South Bend resident Terrance Hunter.

Hunter was taken aback by some of the responses – he says the emails prove there is a divide between police and the community.

And Hunter says next time an email is sent to thousands of people about a sensitive subject, “don't reply all, keep it to yourself next time or send it to someone specifically, don't reply all.”

At one point in the email chain, Mayor Pete Buttigieg interjected and asked everyone to keep in mind that the emails were being sent to thousands of people.  Abc 57 News reached out to the mayor's office to see if he wanted to comment further on the issue.  He did not want to, but he did release a statement about the breathe easy shirt sales:

“As residents exercise their free speech rights, it is important to be respectful of others' concerns….We cannot rest until all residents and all public safety officers view each other in an authentic spirit of mutual trust and respect.”
Share this article: