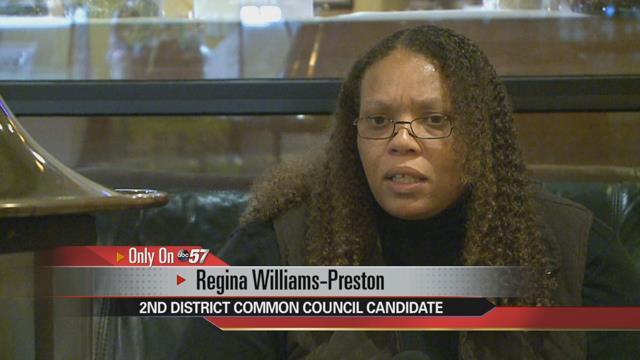 After months of criticism from her opponent, South Bend Common Council candidate Regina Williams-Preston is clearing the air about her debts to the city.

According to South Bend records, Preston owes tens of thousands of dollars in fines, fees and back property taxes.

But she says she and other residents are victims of aggressive code enforcement.

Preston says her situation is similar to many other residents looking to benefit from investment properties.

She admitted she made mistakes but a lot of it was just not knowing how this system works, so she wants to share her story in the hopes others could learn as well.

“I want to make sure that what happened to me, what happened to some of the people I know, so many people who lost their homes through this process, doesn’t happen to anyone else," said Preston.

Preston said she had plans to revitalize her block.

“We purchased the homes with the intent on beautifying the neighborhood, helping to fix up everything that’s around us,” she said.

But her plans hit an abrupt detour.

Three weeks after purchasing several properties, her husband fell ill for an extended period of time.

She said he was out of work for two years.

“So our financial situation changed dramatically, we lost over two thirds of our salary,” she said.

That led to several fines, fees and demolition orders on her properties that totaled $91,822, according to a response from the city from a freedom of information request made back in August.

But she said she lacked the time or capital to meet the city’s demands.

“This is not just my story, this happens to a lot of people,” said Preston.

It was also a similar story for Sherria Parchman.

“It makes you feel like you have no power or control,” said Parchman.

She says she is now left to with a $33,000 demolition bill after the city tore down her property she had big plans for.

“My thought was to build a home for my son on that property to make it handicap accessible,” she said.

Parchman says as a then-single mother of a special needs child, her dreams of building a safe haven for the both of them were crushed.

But the city says their intentions with Code Enforcement is purely for the benefit of residents living in these blighted neighborhoods.

“It’s about the quality of life in our neighborhoods and helping to improve neighborhoods for the people who live in the city of South Bend," said Liz Maradik, Community Investment Planner.

A sentiment that was echoed by the director of Code Enforcement.

“We worked with every resident we could, we extended timelines the best we could to achieve the goal, getting the house done so the neighbors wouldn’t have the issues of a blighted house in their neighborhoods,” said Randy Wilkerson, Director of Code Enforcement.

But some residents say the biggest problem they have with code enforcement is transparency.

“When they don’t give you those options, when this is your first time up against this issue, you don’t know,” said Parchman.