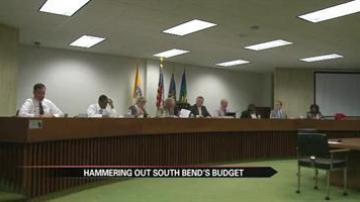 SOUTH BEND, Ind. -- The South Bend Common Council was expected to vote on the city's budget Monday night, but the vote has been postponed.

After two months of meetings and hundreds of questions, this year's city budget is almost finished.

The process of getting there has been tense.

"The mayor is never there, which is another issue that I am really having. You can't ask direct questions to the mayor. The department heads are rarely prepared for the meeting," said Council member Henry Davis Jr.

"A lot of the information that we are just receiving, we should have received that information early on," said Council member Karen White.

Council members say they're not getting the information they need.

"The council is being asked to vote on some pretty significant funding requests without the type of detail that we need," said Council member Valerie Schey.

Still some council members think this budget is shaping up well, despite the hiccups.

"I think the mayor's office has shown that there are areas when things can change they are willing to talk about it and make some changes," said Council member Dave Varner.

According to Davis, there are times when the mayor is willing to give as long as he gets something in return.

Davis says the mayor promised him wells in Rum Village if he voted yes on the two way street project.

We asked Davis if he thought it was a topic that he should be playing politics with.

"No. Because of the fact that this should have been taken care of way before now," said Davis.

Davis wasn't the only one to share that view.

"I don't think that we should have to bargain back and forth; you give me this, I give you that; I think that's totally improper to do that," said Council member Derek Dieter.

They plan to discuss the changes Monday night and vote during a special meeting Wednesday.