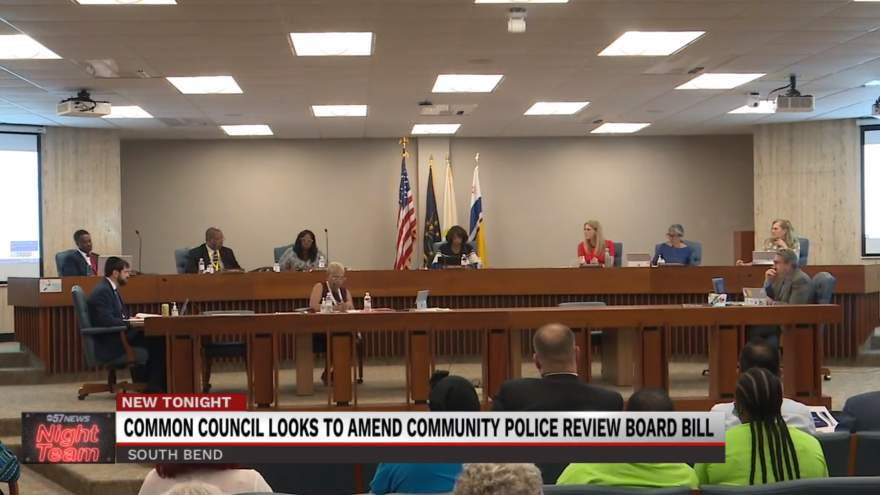 ST. JOSEPH COUNTY, Ind – The South Bend Common Council met Monday, Aug. 9, to discuss a controversial bill that would give authority over the new Community Police Review Office from the city clerk to the mayor.

It all started as an effort to give someone else the power to fire embattled Community Police Review Board leader Joshua Reynolds.

The initial bill sought to give oversight of the board, to the mayor. A new amendment introduced by Councilman Henry Davis Jr. was added Monday evening with the intention that oversight would return to the common council once a new city clerk is elected.

The bill would still give oversight of the board to Mayor James Mueller. Something common council members didn't want to happen.

“Due to a lot of miscommunication, a lot of transparency, mistrust we have no other recourse at this time but to have it more independent under the alternative of putting it in the mayor's division,” South Bend Common Councilmember Sharon MacBride said.

The common council meeting started with all members speaking out on the ordinance calling out the lack of communication and transparency of the whole process with the city clerk. Under the mayor's supervision, the Common Council would have control over the firing and hiring process of the community police review board.

The man hired to lead the board, Joshua Reynolds was thrust into the headlines, when it came to light that in his previous job, as a police officer in Indianapolis, he was suspended seven times, in seven years and recommended for termination.

Many, including mayor James Mueller, called for Reynolds to step down, but he hasn’t. And for City Clerk Dawn Jones to fire him, since she hired him, but she hasn’t.

This new measure would give the power to fire Reynolds and appoint his replacement to the mayor. But many oppose that bill, saying it could pose a conflict of interest since the mayor also appoints the police chief.

I have made amends where I can, and that I have tried to be better. I, oppose this amendment because taking this out in office destroys the independence of this office,” Reynolds said.