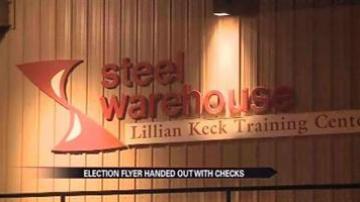 SOUTH BEND, Ind. -- Just hours before the polls opened, candidates made their final push to sway voters, but what if your employer did the same?

Some employees at Steel Warehouse in South Bend are upset after they claim the company encouraged them to vote for Republican Presidential Candidate Mitt Romney.

The employees ABC 57 News talked to said they were hesitant to speak out against the letter, so they asked to remain anonymous.

Despite their own political views, employees feel the letter was inappropriate and they worry if it happened at their company, it could be happening at other businesses too.

Steel Warehouse is a renowned steel processing center with plants in Indiana and seven other states. It started as a small family-owned business in 1947, but now it is a major corporation with hundreds of employees.

Just days before this year's presidential election, employees opened their paychecks to find something they have never seen before.

"It was like an advertisement to me, that is they way I took it," said one employee.

Many employees said they were shocked when they saw the three-page letter encouraging all workers to vote for Republican Mitt Romney.

"A lot of people were taken off guard, some people were offended by it and others were for Romney, so they believed in the letter," said an employee.

The letter states the company has never forced its political views on its employees, but the owners felt it was necessary this time because they "feel so strongly about the direction of the country" and certain policies that directly affect the company.

"They say it is not special interest, it is coming from them, but it is a family-owned business, the stock is owned by family, so it is special interest for them," said an employee.

But is it legal?

"It is considered freedom of speech. Unfortunate that they would do something like that. Some may say that it is intimidation. But your ballot is a secret ballot and that is protected also. So folks should vote their conscience as to what they feel is best for our country."

ABC 57 News tried to contact Steel Warehouse. Supervisors, on duty at the time, said they were not at liberty to comment and directed all questions to the company's human resources department.