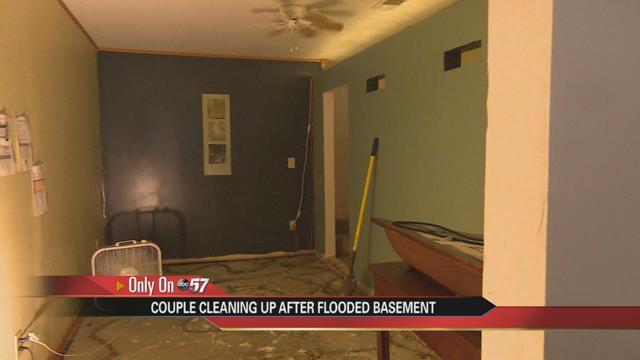 A South Bend couple believes nearby construction by the water department is to blame for their basement flooding on a day it barely rained, costing them thousands.

“[I] got my rugs out of the dryer, and the total basement was flooded with about five inches of water,” Robin Lee Tovar said.

Tovar’s trip down to her finished basement for a laundry run on Wednesday, August 24 turned ugly, as she discovered flooding.

Earlier that same day, the water department was doing construction work on her street, the 1700 block of Tudor Lane, about one house-length away.

“This is where all this water was gushing out,” she said, pointing to a hole in her basement floor where pipes run through.

Her boyfriend, Mike Parrack, documented the damage one day later, after water soaked into their carpet and walls.

“This is after I dumped 12 of these buckets from right here,” Parrack said, in his cellphone video. “This [carpet] is still wet; you can hear [the water]; you can’t see it.’

He added, “The water was pouring out of [that hole in the floor] so fast, it rose up to this level, hit the motor on my sump-pump and fried it. There’s the old [pump]; I had to go buy a new one.”

The couple’s basement is destroyed, including equipment Parrack uses to run a DJ business and a printing business out of his home.

And most of Tovar’s belongings are destroyed too, because she just moved into Parrack’s house in June and was storing her things in the basement.

They estimate the damages to be in the tens of thousands.

In Parrack’s cellphone video, you can see the water line on one of his walls, inches high.

Friends have helped tear up most of the carpet in the couple’s basement, but the work is far from over.

The couple said in the 10 years Parrack has lived in the home – which is set on a hill – he has never dealt with flooding.

On August 24, the city of South Bend received .03 inches of rain, according to meteorological records.

The timing of that construction down the road confuses them.

“I want to know how did this possibly happen on a non-rain day?” Tovar said. “Why did that happen, as soon as these guys were finished working, was our basement suddenly full of water?”

Late Monday, South Bend’s deputy director of public works said the flooding was most likely the result of a blockage in a sewage pipe on the couple's property, and he said his staff does not believe the work being done on the water line down the street caused the issue.

But the deputy director said the couple’s best bet is to contact the city’s sewer insurance program to see how they can get financial help.