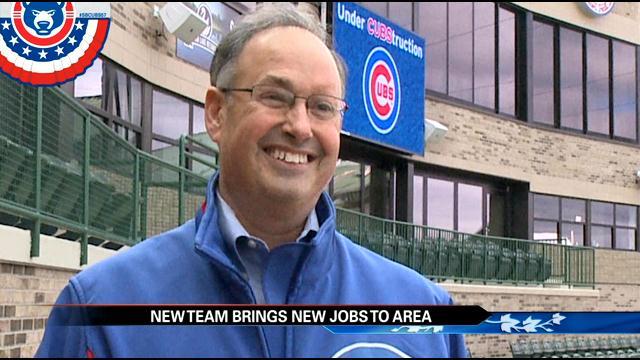 It is opening day and Michiana is already seeing the effect the new South Bend Cubs is having on our local economy.

After holding several job fairs, the cubs hired about 115 new employees this season, making the total number of employees, new and returning, around 300 people.

Fan Host Larry Flickinger has been waiting all year for this day.

He is one of 160 employees returning to Four Winds Field for another season.

But Flickinger said this season is even more special.

“When they announced we were going to be a Cubs affiliate it was exciting for me. I'm just lucky,” Flickinger said.

That same excitement reached hundreds across Michiana who applied to work as seasonal employees for South Bend's new favorite team.

“Obviously they saw the improvements we've made at the ballpark these past couple years. So people were excited to be a part of it. And now as a Cubs affiliate that certainly heightened our interest,” said South Bend Cubs President Joe Hart.

After hosting at least five job fairs, the Cubs hired more than 100 new employees, everyone from high school and college students, to middle aged adults and retirees.

Hart said it is a 10 to 15% hiring increase compared to years past.

The off season is seeing its share of hiring too.

Since the Cubs announced the new affiliation, the merchandise store has carried normal business hours.

This has brought new employees in and has given more hours to returning seasonal employees.

“Our team store is now open five days a week. That's something that didn't happen in the past,” Hart explained. “When you count our seasonal staff, the concessions side, the full time staff, at the end of the day it's probably close to 1.5, $1.6 million worth of payroll.”

The South Bend Cubs said they will likely continue hiring throughout the season.

They said attendance will dictate how many people they need on staff.