South Bend Cubs home opener: What to do in the event of severe weather 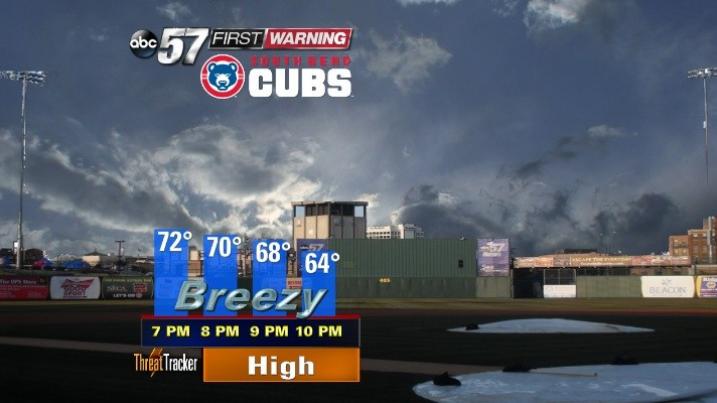 SOUTH BEND, IN - With the baseball season officially upon us, this means that it is the start of severe weather season.  For fans of the South Bend Cubs, this could put a damper on the home opener tomorrow evening.  If you are planning on attending the game, not only must you keep your eyes on fly balls, but you must also keep your eyes to the skies in order to be weather aware.  The ABC 57 First Warning Neighborhood Weather Team has been monitoring the radar and weather models to get the latest forecast for this historic game, and with 24 hours before the first pitch, Threat Tracker has been put on High Alert.  This means there is a threat for thunderstorms, even severe, with the most concern on lightning and wind gusts.

Joe Hart, President of the South Bend Cubs, has had experience with severe weather last year and has a plan in place.

"Typically what we do is if the weather is severe, we move people up into the concourse if we know far enough in advance.  We had a situation last year, we knew severe weather was coming in, it was about 30 minutes out.  We made PA announcements, just to give the fans a warning.  Just so they could make a decision, if they wanted to get to their cars and head home ahead of time.  Last thing we want to do is put people's well-being at risk.  So, we're diligent on that, if we know bad stuff is coming in we certainly make the announcements in advance."

So, in the event of just rain showers, there are a couple different places you could go for cover.  Hart mentioned the concourse or the mezzanine levels, as well as the new performance center where fans could take a shot at batting practice.  Fans can even check out the team store.

In the event of a thunderstorm, fans will hear an announcement to evacuate their seats and head for the concourse level.  The game would be delayed 30 minutes after every lightning strike.

In the event of a severe thunderstorm, which is categorized by wind speeds in excess of 58 mph and hail size up to 3/4 of an inch, fans will be required to take shelter in a bathroom or a more interior part of Four Winds stadium.

Hart said that there will be many ways for fans to know the status of the game leading up to the first pitch by checking their website, following the South Bend Cubs social media pages on Facebook and Twitter, or by calling (574) 235-9988.  You can also check the ABC 57 First Warning forecast here throughout the day and even download the ABC 57 First Warning Neighborhood Weather App for real-time radar updates.