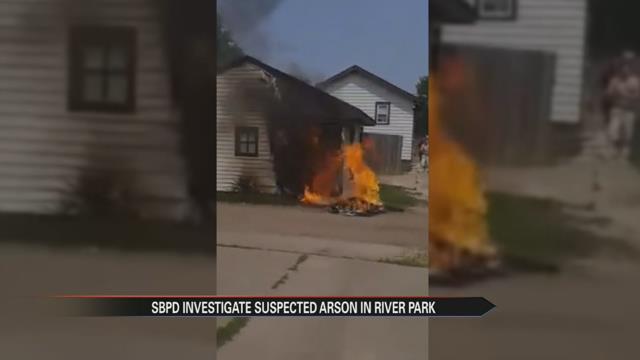 South Bend Police are investigating a case of suspected arson at a home in the River Park Neighborhood.

The fire started at a garage Sunday afternoon, while a father and his four daughters were inside the house.

The man who shot the video said he was sitting on his porch when he saw a 'poof' of flames.

Within seconds neighbors bravely jumped in to help battle the fire.

Homeowner TJ Jorgensen said multiple neighbors, some who he didn’t even know, reacted quickly before the fire was able to spread to his home or others.

“When my wife saw the video at work after I called her and told her everything was okay she started crying. And not so much because of our garage because that’s just cosmetic, all that stuff can be replaced. It was how our neighbors rallied around to help us in a quick situation,” said Jorgensen.

Now the focus has turned to the investigation.

“That’s what the investigator is going with. Somebody walked through and stuck a firework in the garbage can and kept going,” Jorgensen explained.

It is leading some neighbors to believe it could have possibly been set by bored teenagers, out of school for the summer.

“There are some troubled kids that go up and down the neighborhood,” said Linda Yoder.

The fire has prompted Jorgensen to turn his surveillance camera to alley.

He said this time, they were lucky no one was hurt.

“I’m not even thinking about the bad part that happened. I’m thinking more or less, how thankful I am. That could have been really bad,” Jorgensen said.

But they are not seeing an increase in crimes committed by teenagers.