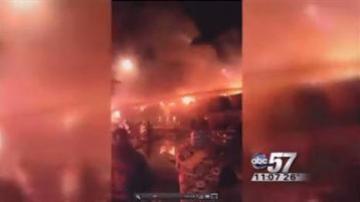 SOUTH BEND, Ind. -- Does the punishment fit the crime? That is the question many South Bend firefighters are asking after one of their own was demoted.

According to the new Facebook policy, firefighters cannot use their cell phones when they are working an emergency call.
Last week, a South Bend firefighter was demoted and is no longer being considered for a promotion to captain. Union President Patrick Kottkamp of Local 362 said the charges have been reviewed, but no action has been taken.
"As far as the punishments, the union doesn't dole those out. That is an administration thing. Our job is to make sure that it is fair and equitable from member to member," said Kottkamp.
Through documents obtained by ABC 57 News and through close sources with the fire department, that is not the case. Several firefighters have gone unpunished for violating the same Facebook policy, including an instance back in 2010, where a firefighter posted an internal email to his Facebook page, followed by snide remarks. Yet, no action was taking against him.
Some firefighters said it is unfair that now, all of sudden, the administration is punishing those who violate the policy. So the question was raised to the union, does it plan to look at the severity of the punishment and the firefighters character? In this particular case, the firefighter who is being demoted has never been in trouble before.
"We don't have much recourse right now other than precedent, and this was the first time," said Kottkamp.
This is a stance many now disagree with, stating it is not right to see one firefighter made an example of with what is considered to be too harsh of a punishment.
This is something the Union President said he will continue to look at. In the meantime, Kottkamp said it comes down to better understanding the policy.
"The administration needs to educate itself, the union needs to educate itself and the members as to what the policy says, to make sure we are all on the same page," said Kottkamp.
Kottkamp said there are several grey areas throughout the Facebook policy that still need to be looked at in the future. However, that may come to late for this firefighter.
The Board of Public Safety will meet Thursday morning to approve or deny the Fire Chief's recommendation for demotion.