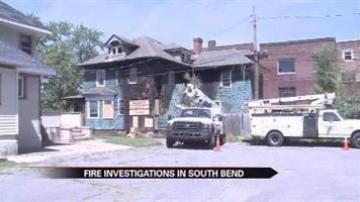 The South Bend Fire Department was busy battling two fires nearly back to back within one mile of the their downtown headquarters on Michigan Street. At this point it looks as if homeless people may have sparked both of the fires, but official cause and origin at this point haven't been determined.

On Friday night the first call came in around 10:20pm that an abandoned building and several old vehicles were on fire in the 1200 block of Michigan Street. Ironically, the blaze was directly across from the South Bend Fire Department. The fenced in area surrounding the building was busted open and it was obvious that homeless people have been staying there. Piles of wood were stacked inside the fence and clothes were visible from the alley.

Employees of neighboring businesses say homeless people frequent the grounds and building nearly everyday and night. One employee who did not want to be identified said she was hoping the city would order the owner to destroy it this time once and for all. The building suffered damage in the blaze as the fire from the vehicles spread to the structure. The employee also said the building caught fire a couple of months ago but it didn't stop homeless people from coming back.Matter of fact she is wondering why city officials would allow the homeless to stay on the property in the first place.

The other fire was called in by neighbors in the 600 block of South Saint Joseph Street. Fire crews arrived to find a 2-story home up in flames. The fire report paperwork thus far states the homeowner is not known, however neighbors tell ABC 57 news the house was vacant and homeless people are usually camped out on the front porch and several have gained entry into the house.

Mike Vaugh, who lived directly behind the house said he just witnessed homeless people drinking booze on the front porch and smoking cigarettes last night. He suggests, "the city should just keep the abandoned building boarded up."

"We basically welcome anyone as long as we have a bed, we'll accept them as long as they agree to no drugs, alcohol or violence while they are here," said Shelide.