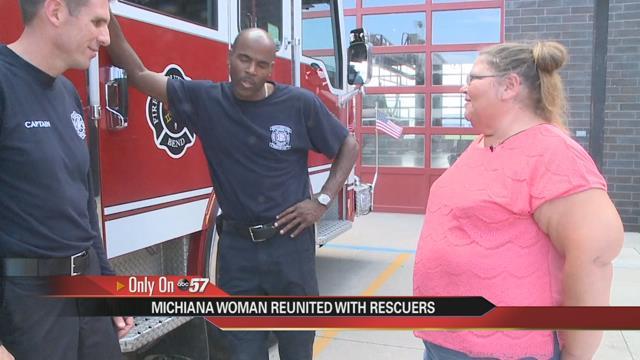 The quick actions of a few South Bend Firefighters is why Lynnette Alexander is alive today.

For the past week, she has been looking for the brave men who risked their lives to save hers.

“As a child you are prepared for tornadoes, for fires, but never anything like flooding,” said Alexander.

It’s been over a week since record rainfall and flooding in South Bend left motorists like Lynnette stranded.

“The amount of water out there was unbelievable,” said Fire Captain David Jester.

Alexander was on the corner of Twyckenham and Ewing, the part of South Bend that was hit hardest.

The company vehicle she was driving in hit a patch of deep water, and before she knew it flood waters were rushing up above her window.

“And it came so quickly, I panicked. Then I see the flashing lights and I said ‘thank God!’”

The crew that saved Lynnette was actually coming back from another call when they stumbled upon her.

That crew was Shift ‘A’  from Central Station in South Bend.

Bob Rice was the driver.

He is a Pump Engineer who has worked the rig for 28 years.

Nyling Gammage is a 19-year veteran with the South Bend Fire Department.

Captain David Jester has been with SBFD for 15 years.

These three have been working together for 3 years.

“He basically opened the door, stepped up on the step, I exited the vehicle, when she was ready we removed from the car and I handed her off to Firefighter Gammage who sistered her up,” said Captain Jester.

The crew brought Lynette to safety and dropped her off at Central Station in South Bend.

Immediately following her rescue, Lynnette took to Facebook to thank her heroes.

Not knowing their names or what station they were from, she reached out to ABC 57 News.

With the help of a few sources, we were able to track down the crew.

Lynnette finally got to thank those brave men that rushed to her aid.

An emotional moment for not only the rescued, but the rescuers.

“It’s hard to see people lose their belongings and their homes and property – vehicles. But you still reflect on the fact that they are still with us, nobody died and those things can be replaced,” said Captain Jester.

Her company car was totaled, but Alexander is thankful for these everyday heroes who saved her life.

“I’m just thankful these guys were there. They do a good job and I don’t think they get enough recognition as they should on a daily basis,” said Alexander.

Lynnette works for a company that facilitates the game of darts and said she plans on helping outfit the fire station with multiple boards as a way to say thank you.