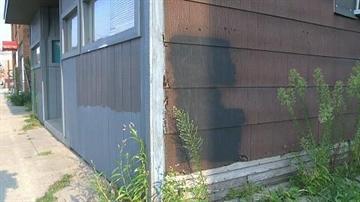 It was not there long though. His property was one of 235 cleaned up in the sixth district as part of the graffiti abatement program.

According to Davis, people on the south side of town felt they were being targeted by taggers. “Neighbors were angry, and so they said, what is the city doing to help us with this,” said Davis.

The abatement program was part of the city’s war on vandalism that was initiated two years ago. This summer the program cleaned up nearly 500 sites, almost half of them in the sixth district.

Some residents on the south side have not relied solely on the city to solve the graffiti problem for them.

Clinton Suggs purchased a street light, and then had the electric company install it for him in the alley behind his home. It illuminates his garage, which had been tagged multiple times prior but never since.

Another home owner in the neighborhood painted a quote from Martin Luther King, Jr. on the side of her garage. Vandals haven’t marred it since, though they did tag another side of it.

According to data provided within a report given to Common Council members, only about 10 percent of the sites, where graffiti was removed, were re-tagged. This has Davis cautiously optimistic about the program. “This could be our baseline year. So we can start from saying okay, where are we in 2011, and then in 2012, and hopefully we will see a decrease,” said Davis.

The program is also projected to come in under budget, according to Davis.