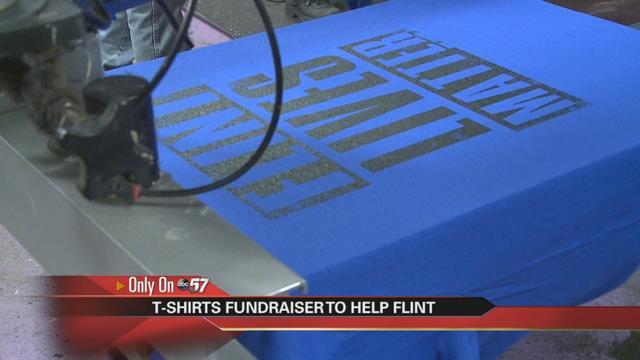 Over the past week different groups from South Bend, Benton Harbor, and Elkhart have all hosted various water drives to support the Flint water crisis.

Now another group in South Bend has started a campaign called Flint H2O. Their goal is to sell tee shirts to raise money for Flint while at the same to show support for a city with so much need.

“There’s just so much going on there that you wouldn’t believe. It really is like a third-world country," said Corey Smith who has family in Flint.

Smith said he has seen first hand how bad of shape the Flint community is in. “This is going to be going on for a long time and they are going to need a lot of help,” he added.

Flint H2O has partnered with Gryphon Print Studio to make the shirts that display the logo "Flint lives matter."

“When there’s something tragic like this that happens, I’m always willing to jump in and help as much as I can,” said Owner Steve Estes.

“We’re hoping these go viral, worldwide, meaning that we will have everybody supporting Flint outside of Flint,” said Flint H20 Coordinator Harold Palmer.

“The whole community is just trying to stick together and wait to see what happens. Everybody is confused and don’t understand or believe that this could actually happen in the U.S,” said Smith.

The tee shirt fundraiser will kick off at 5 p.m. Wednesday at The Gospel Connection in South Bend. The group is also collecting water to take up to Flint on Sunday.

Short and long sleeve shirts, along with sweatshirts are available for order on the Flint H2O website.