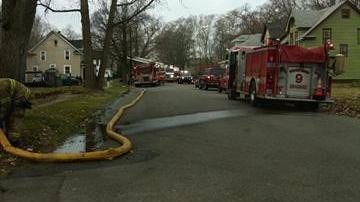 Dayton Street resident Paul Young jumped into action when he saw smoke coming from his neighbors' house next door.

"I pounded on the door and then I called the fire department,” said Young.

They speak so little English that Rodriguez had to be called in to interpret for the family.

"The lady that was staying with the couple, got up to see who was knocking at the door and when she opened the door she noticed there was smoke in the ceiling and in the hallway, so she woke up the other couple and they all exited the house safely,” said Rodriguez.

"I don't understand what he said (Paul Young) but I go outside and my house on fire,” said Quan Gomez.

Despite the communication barrier, Gomez says he appreciates his neighbor's help.

"I missing my house but not my life,” said Gomez.

The fire was caused by an electrical problem and is considered accidental, according to the South Bend Fire Department.

The Gomez family did not have insurance but they are staying with relatives in the area.