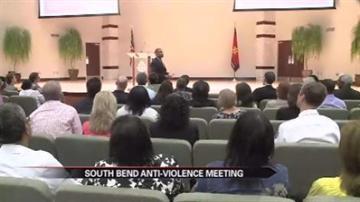 SOUTH BEND, Ind. -- City leaders, the public and members of the city’s Anti-Violence Commission gathered in South Bend to discuss a new program aimed at curbing violence in the city. The program has been used in other cities and a speaker from Chicago says it could work in South Bend.

The meeting was held at Walker Field Park on South Bend’s southwest side. In February 2012, 18-year-old Chris Simril was shot and killed at the park.

Earlier in the day, Simril was at an Upward Bound community event.

South Bend Mayor Pete Buttigieg says that tragedy is one of the reasons the program is being initiated.

"We cannot have another summer like last summer we had an unacceptably violent summer,” said Buttigieg.

The mayor and members of the Anti-violence commission decided to implement a new strategy.

"It's called the Group Violence Reduction Strategy and the expertise around it are at the National Network for Safe Communities,” said Buttigieg.

The guest speaker from Chicago, Chris Mallette, implemented the program in five of the city’s 20 districts. He said that in a two year period it has already reduced crime 30-40-percent.

"Again we are not operating citywide we are operating in five districts,” said Mallette.

"It's going to take everyone in the community to do something about gun violence,” said Buttigieg.

Some residents are wondering why the meeting was held at 10 a.m. on a Tuesday.

"Most people have to work during this time of the day so it's almost impossible to get the community involvement that they are asking for,” said South Bend resident Jesse Davis.

"We shot for a time that could work for our guest speaker and 10 this morning was the time,” said Buttigieg.

Clark, a retiree, is excited to help in any way she can.

"I'm concerned about the kids of right now and their future that they are facing,” said Clark.

The program focuses on identifying key gang members in the community and those who associate with them.

Some are skeptical and want more proof that implementing a model out of a book is going to help curb south bend's violence.

"How well is it actually working and is it doing any good at all?” said Davis.

Many questions will be answered as the city explores the program even more.

The mayor and a small group of the South Bend Anti Violence Commission will soon fly to John Jay College of Criminal Justice in New York to participate in its National Network for Safe Communities training and will meet the author of Don’t Shoot – David Kennedy.

No city funds will be used towards this program.

The cost for the trip and the cost to bring Mallette to speak will be underwritten by the Community Foundation of St. Joseph County and the African-American Community Fund.