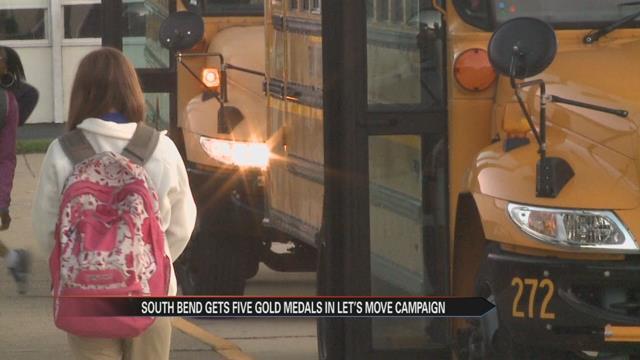 The city of South Bend is making moves when it comes to the health of area kids.

And it's the first in the state to reach a major milestone on that front.

South Bend is the first city in Indiana to earn all five gold medals for the Lets Move cities, towns and counties campaign. It's key focus is getting kids to live healthy lifestyles.

To get a gold medal South Bend had to launch at least 3 recommended policies by the National League of Cities.

The goal is to increase access to physical activity and fruits and veggies.

One way the city has done that is through a concept called "walking school buses." It's a group of children walking to school and back with one or more adults to supervise.

South Bend also launched the "Walk with a Doc" program where children walk weekly with a doctor to discuss health issues. Not only is the city making waves in the state for this.

South Bend is only the third city in the Midwest to reach this milestone.

The city will officially celebrate its success at the ROC Ur Body Family Fest on September 11.