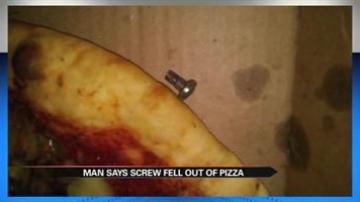 SOUTH BEND, Ind. -- A South Bend man says somebody screwed up his pizza. After eating his second piece of pizza he discovered part of a kitchen tool in the pizza. He filed a complaint with the health department.

"Went to Vesuvio and ordered a pizza. Got a pizza for myself and my buddies got 2 pizzas as well. And next thing you know I'm eating 2 slices, everything is fine and dandy and then I go to pick up my third  slice and something falls off of it," aid Brandon Laskowski.

Laskowski says it wasn't a chunk of pineapple that hit the box.

"I'm just sitting there thinking what is this item? I end up eventually looking down and it happens to be a flat head screw," said Laskowski.

He says Vesuvio's Pizza is to blame for the unwelcome topping.

But that's not all he found.

"After I saw the screw fall on the box I just gandered [sic] around the rest of the pizza that was untouched at the moment. That's when I saw the nut casing," said Laskowski.

Laskowski says he filed a complaint with the Saint Joseph County Health Department.

The department confirmed they received Laskowski's complaint and pictures.

A health inspector plans to head out to Vesuvio's within the week to get to the bottom of this complaint.

We went to Vesuvio's on East Wayne Street in downtown South Bend, but they didn't open until later in the date.

The health department says their late evening hours make it difficult for an inspector to stop by.

Laskowski says he appreciates that Vesuvio's gave him a refund, but he's not sure that's enough.

"At this point to be truly honest with you, this incident alone makes me very wary about eating out anywhere," said Laskowski.

The manager inside Vesuvio's said the pieces that held the wheel of the pizza cutter fell into the pizza but they didn't notice until it was out the door.

He said they refunded Laskowski's money and will give him his next pizza for free.