South Bend man sentenced to 50 years in prison for murder 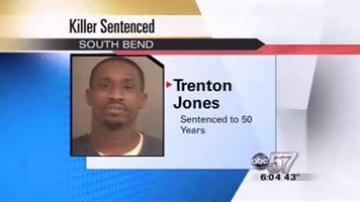 SOUTH BEND, Ind. -- DeCarlo Hockaday was killed by multiple gunshot wounds on June 8, 2010 at a house in the 1600 block of N. O'Brien Street in South Bend.

Trenton Jones, 30, was found guilty of murder following a jury trial on Aug. 25.

The first trial for Jones; held in April, 2011, resulted in a hung jury so the case was retried in August.

Jones was sentenced on Friday before Superior Court Judge Roland Chamblee to 50 years in prison.

The sentencing range for murder is between 45 - 65 years, with the advisory sentence being 55 years.

(Source: This information was in a press release, courtesy of the St. Joseph County Prosecutor's Office.)