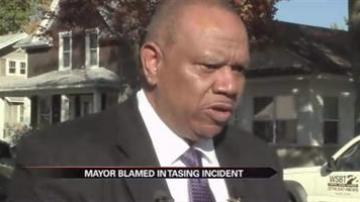 SOUTH BEND, Ind. -- Friday a citizens' group is asking the South Bend mayor to resign and it is all because of a case that has not been addressed by police.

The Franklin family told us police barged into their home in July and wrongfully ta zed their 18-year-old son. While the cops were actually looking for his brother the family says they tried to get a police report, but officers would not give them one.

Friday, a citizens group stepped in to help and to hold the mayor accountable for not disciplining his officers.

"We believe it sends the wrong message to south bend police officers that they are untouchable that whatever they do the mayor and the interim police chief is going to protect them so that's why we are involved because we see the continuation and an interconnection ness of the tape situation" said Mario Sims, CUBG President and CEP.

When we talked to police Friday, they told us an internal investigation is going on.