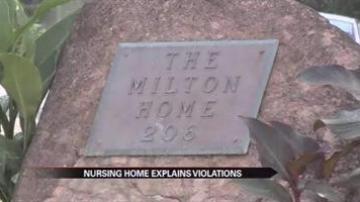 SOUTH BEND, Ind.-- In June of this year, Cathy Janeczko, Executive Director of the Milton Home, reported seven violations that occured at her facility.

Something, she wishes she didn't have to do.

"I follow the letter of the law," said Janeczko.

But Indiana law required her to mention the cases of sexual abuse by a visiting family member.

"We we're appauled," said Janeczko. "Thank goodness he didn't do anything more than touch her inappropriately, because that's bad enough. You don't want anything like that to happen."

That person is banned from entering the care center.

In a separate incident, a patient didn't receive medication for 11 days.

Janeczko said the nurse responsible is no longer employed at the home.

"Since then, we've put other plans in place to ensure this will not happen again," said Janeczko.

Those plans include extra attention for residents, as well as training sessions for assisting nurses. Fifty-nine people currently live at the Milton Home, and she wants to make sure they're given the best care possible.

"I just feel like there's got to be somebody out there that's a voice for them, and can care for them," said Janeczko.

She points to her facility's rating, which is higher than other nursing homes in both care hours given and star ratings.

This was a minor hiccup in business, unlike other area nursing homes.

"Staffing is a big issue," said Janeczko. "I think people need to staff as heavily as they need to, to make sure the residents are getting the care."