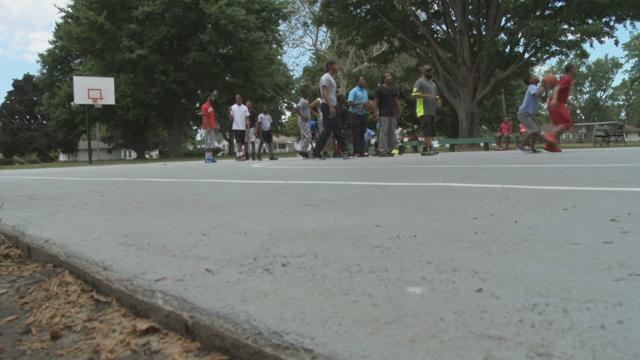 The ball is rolling for South Bend parks as the city department is pushing more than $5 million in upgrades to more than 20 parks around the city.

“The way people engage with their city is a lot to do with the way the spaces look so we’re excited to play our part,” said Aaron Perri, South Bend Parks and Recreation Director.

Kennedy Park was the latest location to benefit from the city’s master plan and even more changes are coming soon.

City officials honored the Rotary Club and the Kennedy Basketball Court for their collaborative turnaround efforts for the park.

“Finally having this basketball court not only be an idea and not just a conversation amongst meetings but actually be a physical resource for this community there’s no greater feeling at this point,” said Phillip Williams, Kennedy Basketball Court Project Organizer.

It was a sweet success for Williams.

He spent his hard work and sweat fixing up his park.

“We went from having a half court with lines that were incorrect with out of bounds that were the grass. But now we have an official court with official lines, two rims so we can play full court,” said Williams.

That was his motivation.

He wanted to bring basketball to his neighborhood and others, just like the court renovations headed to Fremont Park.

But there are more surprises in store for these sites.

“You’ll see all kinds of new things coming on line, we got the splash pad coming online at Fremont Park, we got the rum village aerial adventure coming up there,” said Perri.

Some changes will come very soon, others will come later after community input.

“This summer we’re going to be asking for community input on a plan that involves all of our riverfront parks and trails,” said Perri.

And now most park’s around the city will see a facelift.

And those will decisions will include the voices from the community