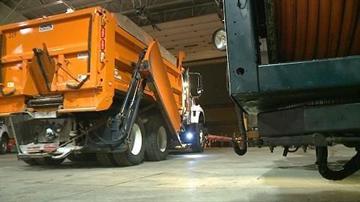 SOUTH BEND, Ind. – A major winter storm is passing through the South Bend area and bringing tons of snow with it.

It’s an event Greg Brucker, a general forman with the City’s Streets Department, has been waiting months for.

Brucker says he loves the snow, and he makes his living make sure the streets of town stay clear of it, or at least relatively clear.

He was watching the departments own weather feed sent in by satellite, as well as local media weather reports like those posted in other areas of this webpage.

His biggest concern was the wind. With high winds forecasted, he knew drifting would be an issue if snowfall totals were close to predicted levels.

This is especially troublesome in the northwest part of South Bend and around South Bend Regional Airport where there are wide open spaces.

“We try hard to keep those areas open especially the industrial parks because we want people to be able to do their business,” said Brucker.

Brucker takes his job keeping roads open seriously; a poster hanging in the staging area of the garage reads, “Plow like a Champion.”

“If we are closing businesses because we can’t keep a street open that makes it tough on them, and the economy is tough enough as it is right now,” said Brucker.

The 25 trucks on the roads Sunday night into the wee hours of Monday morning are hauling a 50/50 mix of sand and salt, weighing anywhere between 10 and 15 tons.

It is still warm enough for salt to be a viable solution to keeping the streets clean, but that won’t last long. Once the temperatures dip into the teens, less salt can be used because any melting that occurs immediately refreezes.

While the trucks were out on the roads, other staff had already begun prepping for the morning shift; attaching plow blades, and filling trucks with the sand-salt mixture.

Brucker expects people to have longer commute times Monday because of the slower traffic.

Leaving early; sticking to main arteries; and being extra cautious at intersections and on hills is always recommended, according to Brucker.

Even though the plows do focus on intersections and hills, it can take up to three hours before a plow rolls through that route again.

Most routes take around an hour and a half to complete, but some are longer than others.

Drivers are given both a text and printed copy of their route’s map.

They will then run that route as many times as necessary for their entire shift, which last 12 hours.

When their shift is over, they go home and a new crew comes in to take over.